The year is 2016, and we live in a society where slang words are replacing “actual” words. The way I perceive slang is a word term or phrase that replaces the spot for a variety of adjectives. The general lifespan of a slang terms seems to be a couple months before another term starts being used then, it eventually spreads like a virus. The younger generation is constantly exposed to many social media influences that affect how they act and talk. Slang is changing and growing so fast that a language barrier is being formed, proving it to be more difficult for the younger and older generation to understand each other.

Social media promotes slang terms and words, “lit” is an example which is used by everyone at the current moment. When searched up on urbandictionary.com these are the definitions I found on “lit”.

I asked a couple of my friends “what does lit mean?” And “where do you think lit came from?” These are the responses I received. 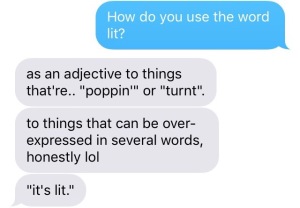 In simpler terms, the word “lit” is described as an adjective that can be used to explain how fun or awesome something is. The best way to describe the slang “lit” is with more slang such as “poppin”, or “turnt.” When it gets to the point that the only definition people can think to describe slang is more slang, I believe it’s getting ridiculous and out of hand.

The next question I asked the test subjects, my friends, is where they think the word “lit” came from and originated. This is the funniest response I received.

While very humorous, they’re responses answers a lot. Most people do not know the origin of a slang term. This is caused by the constant overwhelming amount of content they intake from social media daily. One person could have used the word “lit”,whether it was a random person, boy or girl, perhaps even a celebrity. In regards to social media, slang spreads like a rumor about who hooked up at a party around the high school hallways.
The younger generation doesn’t know where a word came from, who started it, and what the actual definition is. Teens and young adults seem to make up their own definitions to previous words to fit their lifestyle and to sound “cool.”

This generation is filled with followers, teens and young adults on social media, who seem to go with the flow. Individuality has lost its touch on this generation because we all strive to be like everyone else. It all starts with the words that come out of our mouths, to the clothes we wear, and the way we interact with others.

Teens and young adults seem to want to be exactly alike and it’s a shame. No one wants to be the black sheep out of the crowd and people would rather go with what everyone else is doing/saying instead.

So what happens when we get older?? Will our ability to talk professional be hindered by the insane amount of slang terms such as “lit” being used by everyone, everywhere. I think the answer is yes. Our vocabulary level as a whole is being lowered and lowered because of slang and our intensive usage of it.